The Brecon Beacons National Park Authority have explained the earthquake struck at 2.31pm on Saturday 17th February 2018 and was followed at 3.09 and 4.27 by two small aftershocks. The quake measured 4.4ML on the magnitude scale – the ML means ‘local magnitude’ often referred to as the Richter magnitude. 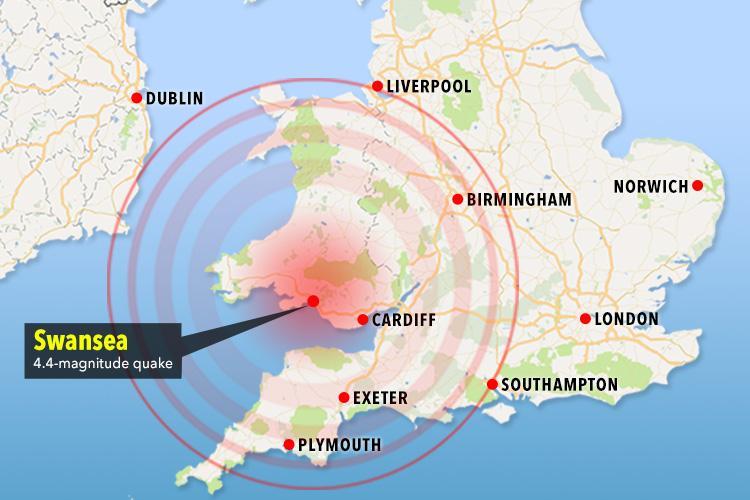 Image from The Sun Newspaper

The scale is logarithmic so a quake of magnitude 4 is ten times more powerful than one rated at 3. The original quake was felt over a wide area of Wales and England though the aftershocks are likely only to have been picked up by seismometers. The depth was calculated as 7.4km which is relatively shallow.

The British Geological Survey (BGS) gave the epicentre as at 51.776 degrees north, 3.837 degrees west (Ordnance Survey grid reference SN 733102) beneath Bryn Melyn/Mynydd Uchaf which is near the northern edge of the South Wales Coalfield. That puts it about 2.8km southwest of the village of Cwmllynfell and 3.6km outside of the National Park and Geopark and in the NW corner of Neath Port Talbot unitary authority area.

This is the largest earthquake to have been felt on the British mainland since the 5.2ML Market Rasen earthquake of 27 February 2008. There have been a cluster of relatively significant earthquakes (in British terms!) around the lower Swansea Valley over the centuries, the last major one being the 5.2ML Swansea Earthquake of 1906, an event which occurred just 3 months after the much larger, more well-known and more devastating quake in San Francisco. Others over 5ML were recorded near Swansea in 1727 and 1775. A 4.2ML quake occurred beneath the Bristol Channel in 2014 and was felt in our region. Other quakes emanating from within Wales and which hit the headlines include the Llŷn Peninsula quake of 19 July 1984 and the Sennybridge quake of October 27 1999.

An earthquake usually results from movement on a geological fault and represents the sudden relief of strain that has previously built up along the weakness. The BGS records numerous faults in the area – indeed the fact that this is a part of the (now largely industrially inactive) South Wales Coalfield means that the area has been geologically surveyed in considerable detail. Numerous N-S aligned faults are known and date from several hundred million years ago – they were active at that time as the coalfield was being stretched in an east-west direction. A notable one is the westerly-dipping CwmllynfelI Fault which runs north from Cilmaengwyn in the Swansea Valley beneath Bryn Melyn (epicentre) and extends to Herbert’s Quarry on the Black Mountain where it peters out to the north. It is not known however whether this event can be related to a known fault or else relates to a previously unknown one.

The Swansea Valley itself follows the line of the Swansea Valley Disturbance, one of Britain’s major geological structures being a belt of faults and geological folds running NE from Swansea Bay towards Brecon and beyond and active during the Caledonian and Varsican orogenies (mountain building periods) of 450-400 million and around 300 million years ago.

Britain has been a seismically quiet part of the world for a long while but our part of the Earth’s crust still experiences stresses related both to the continued opening of the Atlantic Ocean and to the ongoing Alpine Orogeny i.e mountain-building in southern Europe.”