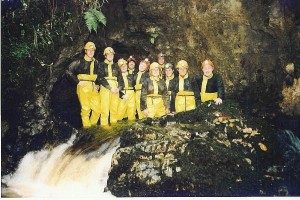 Porth yr Ogof is famous for having the largest cave entrance in Wales, at over 17m wide and 5m tall, it attracts attracting caving hobbyists and aficionados from across the globe. Paintings of the cave have existed since the early nineteenth century, indicating that it has been considered the caving crown jewel of the Brecon Beacons for years.

Why is Porth yr Ogof the go-to location for caving in Wales, and what caving adventures do Adventure Britain offer there? 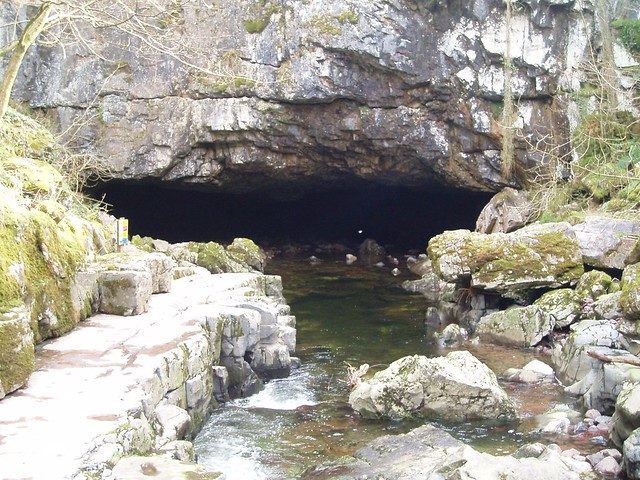 While the cave gets its plaudits, the walk there and the surrounding wildlife isn’t too bad either. Following a rocky walk down, the gorge of the Afon Mellte attracts both ramblers and cavers for its striking view.

The cave is notably picturesque all year round. Looking out at the river from the mouth of the cave is lovely at all times of the year, with the light through the trees and the reflection off the water; it is beautiful scenery such as this that makes making it a popular haunt for photographers. Like much of “Waterfall Country”, you could spend hours here just drinking the atmosphere in. However, if you wish to go into the cave, you’ll need to do it with a qualified caving instructor. While popular, Porth yr Ogof is dangerous without proper care. The cave should also be avoided at times of rainfall, as the footpath can becomes slippery and cave hazardous.

Despite the small possibility of danger, Porth yr Ogof, thanks to its huge entrance, still looks like a caver’s paradise without even having to set foot in it.

Perfect for Beginners and Experts 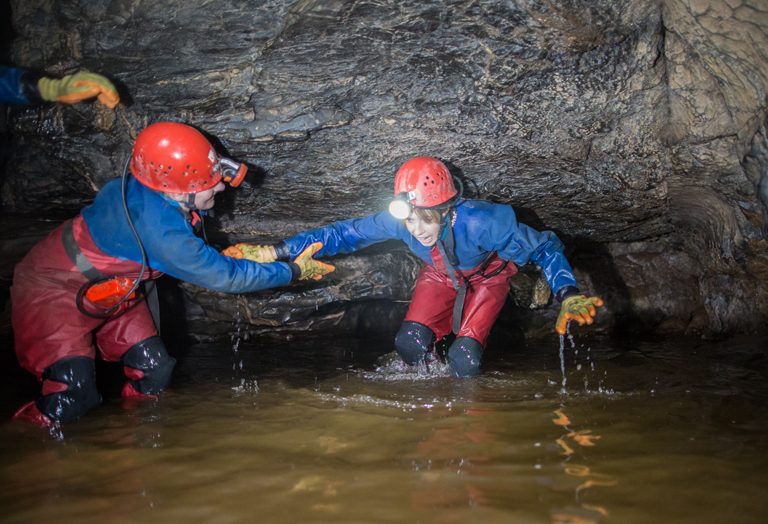 Porth yr Ogof is ideal for those just starting their caving adventures, as long as they are accompanied by an expert. The cave acts as a detailed primer for caving, complete with a letterbox, descents and the need to manoeuvre through small crawlspaces.

The variety found in the cave makes it an entertaining subterranean trek, offering something for all cavers. Some of the views of the limestone rock and shafts of light have given many a novice the caving bug, especially when paired with one of the passionate instructors from Adventure Britain.
As a novice, you should always cave with an expert instructor and have all the correct equipment. 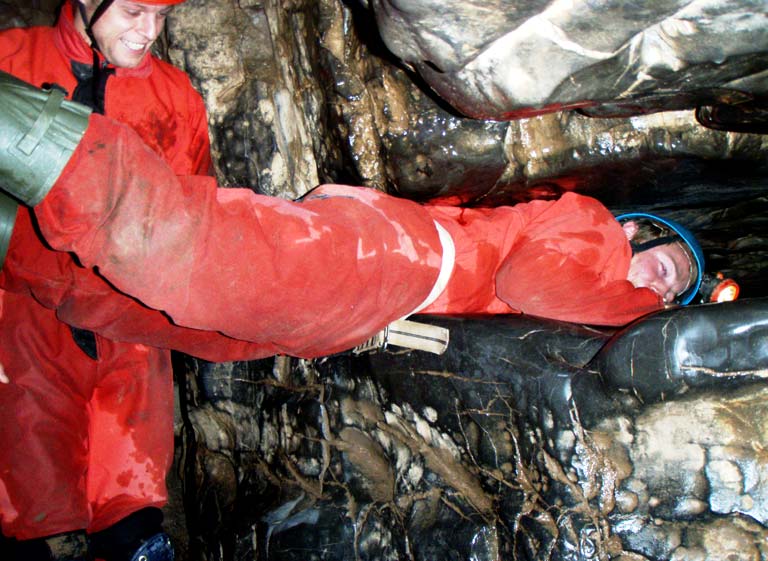 At only 2,200m in length, Porth yr Ogof isn’t a time-consuming commitment, meaning it is ideal for those getting into caving or veterans who fancy a shorter, detail-packed cave. Despite not being the longest cave network in the world, Porth yr Ogof is filled with eye-catching caving landmarks and idiosyncrasies, mostly due to its limestone features.
The main cave is accessed by a smooth limestone walkway, with the first big landmark being the White Horse Pool, which gets its namesake from the white calcite vein accompanying the pool on the wall behind it.

Towards the end of the main entrance is the Resurgence Pool, which you should never cross. Signs here point cavers to alternative entrances given this section of the cave’s infamous reputation. Even though the Resurgence Pool looks small and easy to navigate, it isn’t. Following the Main Cave is The Maze, which is filled with holes to traverse the upper and lower levels of the cave. There are a couple of exits and entrances around here, but the cave has a few more secrets yet.

The Creek and Hywel’s Grotto is the next section of the cave, the former of which starts at the southern end of The Maze. Hywel’s Grotto is quite appealing to the eye, a small chamber made up of calcite pools, formations and pools.  An experienced caver and instructor will be able to guide you through the cave safely without missing any of its best features. 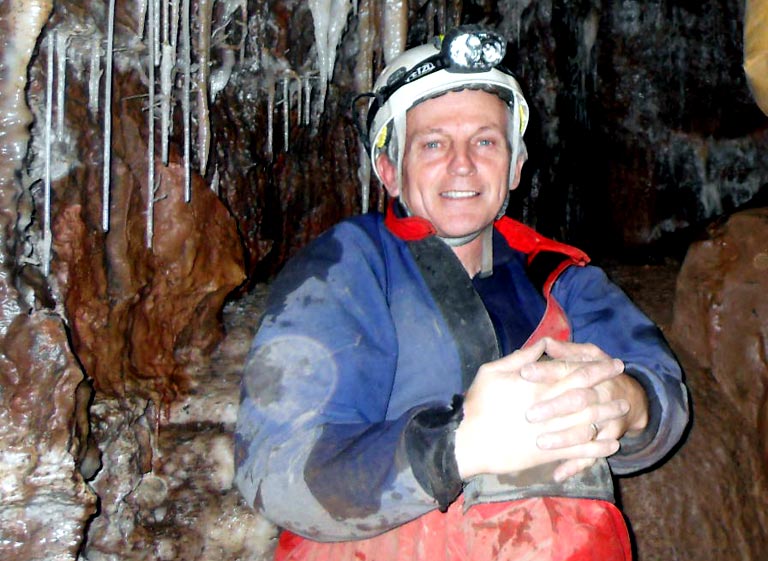 Porth yr Ogof, along with the rest of the caves in Waterfall Country, has amassed a reputation for its striking, unique limestone formations.  Caroniferous limestone stretches across the entirety of the Brecon Beacons, covering 45 miles long with only one mile in width, meaning the cave network is incredibly compact and detailed. Porth yr Ogof has a number of striking limestone features, stalactites and illustrative calcite veins that make it a simple joy to look at and experience.

A Long History of Caving and Exploration 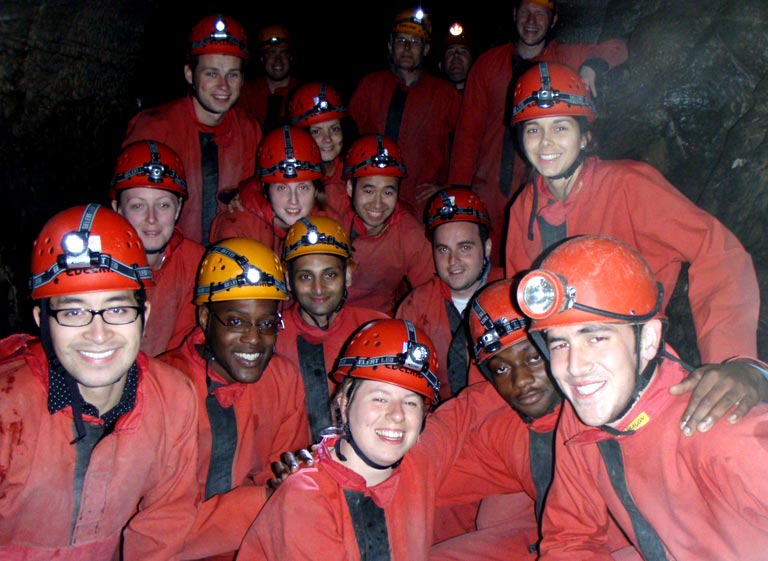 Porth yr Ogof’s long history as a spot for caving in Wales speaks volumes for its appeal. Ever since the nineteenth century, explorers have surveyed the caves, painted them and written reams of pages inspired by their beauty.  For a timeless caver’s paradise, then check out Porth yr Ogof as part of Adventure Britain’s caving programme. We have the expertise and trust to put together a safe, entertaining and unforgettable caving adventure.